If you’re in New York City this weekend, be prepared to shield your eyes in case you accidentally catch a glimpse of Mr. Brainwash‘s show Icons. Please, somebody who likes his work, please explain to me what you like and what I am missing (no conspiracy theories please). I am so confused! That is all I will say for now on the subject. 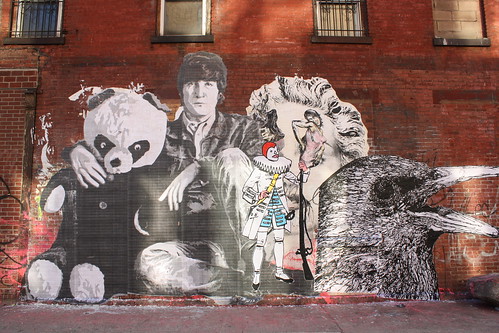 … and two relatively new elbowtoe pieces. Took Clownsoldier out to this wall. The MBW literally went up the other night cause when I was scoping this spot it wasn’t there. So all of this is totally fresh. 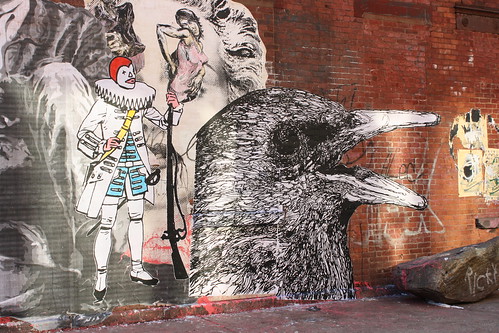 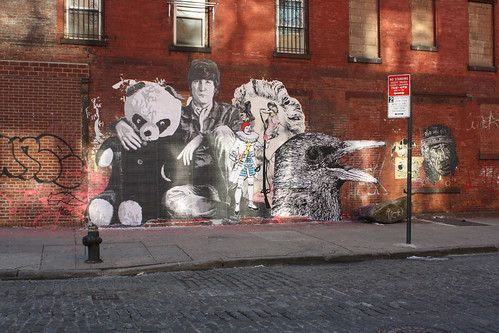 One thing that makes street art so great is the dialog it creates, and the opportunity for collaboration.  Of course, I think it’s going to be a while before I see anything better than Skewville’s Your Ad Here, but Elbow-toe has made something pretty interesting out of a decaying wheatpaste by Mr. Brainwash.

I really like The Opera Gallery. The put on good shows. They put Ron English and Banksy next to old masters. Great stuff.

Well now they are doing a Mr. Brainwash show at their New York City location. Check out the website, if you dare. Not 100% sure when the show opens, but I hear it’s sometime in December, and the website says he is already in NYC, so it must be soon.

I will probably go see this show in person just to be sure, but I have no faith that it will be any good. Portraits made out of broken records sounds like something you would buy at the Sunday market. But hey, I’m just one guy with an opinion. Does anybody disagree?

There are numerous examples of artists who put up wheatpastes or flyposted advertisements when they have a show about to open, but they also aren’t what I want to address today. I want to focus on a few more recent and blatant examples of street at as advertising and advertising as street art.

First, there is Kaws. He did some work for Kanye West’s new album, including this piece in Times Square:

For a guy who started as a graffiti writer and transitioned to a street artist who subverted (or at least changed) advertisements, he sure has come a long way. I’m not going to say it’s good or bad that Kaws is doing advertisements. I’d probably rather he didn’t, but I can’t blame him for wanting to make some money and get up in Times Square. People change, and I don’t think he’s shy about how he has changed. There isn’t a false front there. Kind of like Kanye himself.

Rappers don’t usually start out their careers by saying “I really want to rap and get a connection with fans and spread a message.” The stereotypical rapper justs comes right out and says “I wanna get really extremely rich.” By comparison, your average rock start has to worry about “selling out” and staying true to their originals and all that. Inside, that rock star is probably thinking “I really want to buy a mansion some day,” but they’d never be allowed to say that out loud.

Kaws doesn’t claim to be this anti advertising subversion king at all, so more power to him I guess.

And the important thing to keep in mind here is that Kanye’s record label paid for that ad. It’s not like that billboard is a wall which would have otherwise been taken and used by street artists or graffiti writers.

More after the jump… END_OF_DOCUMENT_TOKEN_TO_BE_REPLACED

So I saw this article on Trendhunter, but their site is a bit disorganized, and I can’t even seem to find the correct photo gallery. So I went out looking for Obama street art pieces on my own. Here’s 16 of my favorite Obama pieces (in no particular order).

Check out the rest of the images after the jump…