Know Hope just got back to Tel Aviv after an intense lithography workshop at Edition Copenhagen. I’ll put up an image of the print he finished there as soon as I have one.

He also put up some great street pieces during his stay, such as this one marking the entrance to the tunnel below Dr. Louise’s Bridge. Seems like this is a regular spot for artists there to hit.

Know Hope is one of my favorite artists, so it’s always a treat to see his latest work.

This is a piece in Tel Aviv:

And these are some pictures of the piece that Know Hope created for the Brooklynite Gallery‘s “Go Get Your Shinebox” show (awesome video of all the pieces in that show here):

Aakash Nihalani and Know Hope just got back from the Blk River Festival in Vienna. Here’s a cool time lapse of one of their collabs. More work from Aakash below, including a playful addition to a classic Banksy image (photo by Yvonne Kaufman), plus a close up of the piece you see in the video. 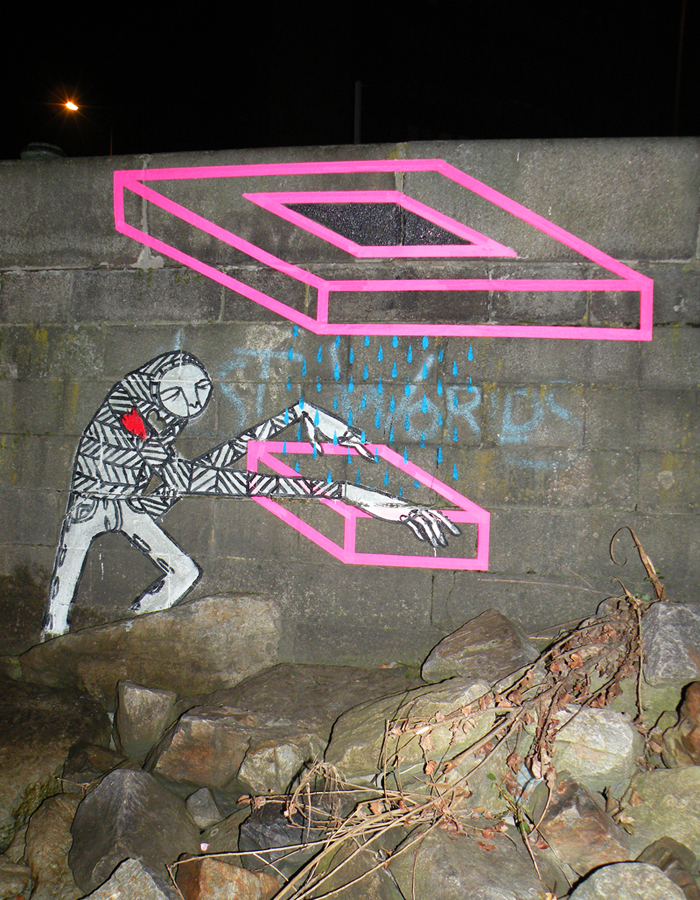 Fame Festival isn’t the only place artists are taking over abandoned buildings. The leaders of Israel’s street art scene recently painted a building in Tel Aviv for their show Kindred Times and Future Goodbyes. Know Hope, Klone, Foma and Zero Cents all participated. Here are some pics that Know Hope sent me:

More after the jump… END_OF_DOCUMENT_TOKEN_TO_BE_REPLACED

So a week or two ago Know Hope says to me that he has a secret project in the works. Something about taking over an abandoned house. Sounded like a great idea, but I wasn’t sure if anything would actually come of it. Turns out, Know Hope and his friends were further along than I realized. The project, now called Kindred Times and Future Goodbyes, was well underway. In fact, it’s going to be opening at a secret location in Tel Aviv on Saturday. This is what street art is about.

An Exhibition in abandoned house in the form of a collaborative effort between : Foma <3, Klone, Know Hope, Zero Cents.

This exhibition came to life as a natural extension of the constant collaborative creation of the group.

The location is secret on account of legality issues and therefore will be announced at noon time, on the day of the opening.

The exhibition is located in a derelict building that has been abandoned for many years,and was once used for residence. The building remained texture-ridden and saturated with old memories, memories which the artists translate into present time through their artistic interpretation.
The wall paintings are a new periodic layer of paint that add on to the already existing peeled layers of time. The artists use these longstanding layers, which represent remains of personal stories and traces of memories, absorbing the existing textures and inhabiting the building with their artistic and contemporary interpretation.

Although the new layer of paint created for this exhibition is soon to become covered with new layers of a renovated building, it is added to a pool of memories which can’t be evaded and enriches it, when it is bound to be preserved between layers of past and future times.

The location and further details to be announced on www.kindredtimes.blogspot.com

The artists have been prepping the building recently. Here’s a couple pics (plus the Zero Cents piece above is part of the show):

It’s always fun to see artists painting together, which is why this piece is pretty nice.

The spindly figure on the left is by Know Hope, The guy in blue and grey is from Chris of Robots Will Kill, I’m not sure who painted the bird or the guy in the checkered hat, the next figure is by Veng of Robots Will Kill, and then the bear is by Flying Fortress and the guy above that is by Chris again.

With the team at Carmichael Gallery sadly tearing down his installation today, I decided I’d give you all a little update on what Know Hope got up to next.

After finishing his work in LA, Know Hope flew to New York to represent Israel at “No Soul For Sale – A Festival of Independents” at X Initiative. Of course I’m biased, but I thought what he did there was, as always, very moving. I’m really enjoying the delicate thematic progression in his work these days.

Thanks for the photos, Luna Park!

Know Hope also found the time to get outside and do some painting in Chelsea before heading home.

These photos were taken by Chris Stain. I found them on Brooklyn Street Art.

Speaking of Chris, can it please hurry up and be August so we can find out what he and Armsrock have in store for us at their Ad Hoc show? All I know is that it is going to be nothing short of amazing.

Although I only planned to write about one, somehow I’ve managed to fit three of my favorite artists into this post!

Last week was the opening of Know Hope‘s solo show at the Carmichael Gallery and their group show Mood Swings. Here’s a photo from each.

More photos and some very short reviews at unurth.

Just got these photos in my inbox. Some photos from Know Hope‘s upcoming show “the times wont save you (this rain smells of memory)” at the Carmichael Gallery in LA. I can’t wait to see more.

More photos after the jump… END_OF_DOCUMENT_TOKEN_TO_BE_REPLACED