Spring has sprung in Philadelphia, and the local street art community seem to be celebrating with new ad takeovers in the city’s bus shelters. Thanks to Jordan Seiler / Public Ad Campaign’s Public Access initiative, opening the advertising kiosks in the vast majority of Philly’s bus shelters is a breeze. Just this week, Joe Boruchow and NDA, both of whom we’ve recently shown at LMNL Gallery, replaced a few ads with their own artwork. NDA’s pieces were both collaborations with Hellbent, who promises similar work in New York City soon.

Jordan Seiler was the first artist in recent memory to bring ad takeovers to Philadelphia, back in 2010. And until last summer, that’s about all there was, until Seiler made the Philadelphia infinitely easier to open up by producing a “key” that matched their custom security screws. Vandalog contributor Caroline Caldwell was probably the first to test out a Philadelphia key. Since then, the tools have reached a handful of artists in the city.

Unfortunately, it looks like this new-found street art surface may be short lived in Philadelphia. Hundreds of the city’s bus shelters are being replaced with an upgraded model featuring electronic billboards. With that in mind, for those with keys, here’s to making good use of them while you still have a chance.

Photos by Conrad Benner, Jordan Seiler, and Thomas Buildmore, and courtesy of NDA and Hellbent

A manic excitement came from Hellbent as he opened the door to his studio, his first visit in nearly two weeks. Strands of tape wafted in the breeze created as the artist circled the narrow room. The lace-patterned strips dangle, waiting for their newly reimagined purpose, as a part of the Mix Tape series. Leftover from masking his other series, cleverly titled Demos, this formerly discarded tool becomes repurposed. These two bodies of work combine to form Mighty Tanaka’s upcoming exhibition, Even Romantics Love Violence, opening tonight from 6pm – 9pm.

Hellbent continues tracing his way around the periphery of his space, as if following a track, and sharing his inspiration along the path. In the same breath, I am told about David Wojnarowicz stenciling through the 80’s before being launched into a discussion about graffuturism and post-graffiti art. With an education in art history, Hellbent rattles off influences with the intensity of someone who devours the visual culture in which they are surrounded. This excitement for art animates the room, bringing dimensionality to the flat plains in his panels.

The exuberance that Hellbent exhibits in his studio weaves itself though the neons and lace that connote his style. Once the backdrop for characters, his patterns have come to the foreground in the past year, most notably in the artist’s largest wall to date, a collaboration with See One in Bushwick. Here, the delicate details that were once behind bold graphics, such as Freud’s jawbone, now stand alone adjacent to See One’s shards, which dance lightly across the surface. Even Romantics Love Violence marks an several important transitions in Hellbent’s evolution; while the artist’s geometric interpretation has appeared in the public sphere in multiple locations, Mighty Tanaka is the first to give this work a solo exhibition.

The second shift in the artist’s body of work comes through the repurposing of masking tape, where patterns emerge from the overspray found used to mask his lace stencils. Using liquid glass, board, and tape, the Mix Tape series becomes a tongue-in-cheek poke at these materials. Just as the artist consumes the visual history with which he is surrounded, each part of his process has been utilized for these series. Through his varied means of creation, the two play off of one another as the light pieces of tape become encased between layers of board and glass. In contrast, the Demos sufrace remain untouched, thus retaining the delicate texture of lace.

The energy comes to a close with the studio visit as the florescent layers of tape, glass, and wood are stacked together. The pieces are placed on a shelf and the light is turned off.

For many artists, their work is a manifestation of themselves, be it politically engaging, thoughtful, or comedic. In the case of Hellbent, the care taken to thoughtfully plan out the arrangement of lace combined with the energy of neon spray paint speaks to these sensibilities.

While Bushwick did not take the bulk of the damage in Hurricane Sandy, the area’s reliance on underground subways into parts of the city that are now without electricity left many artists trapped in Brooklyn. National and international flights, trains and busses were all canceled for days, leaving artists Pixel Pancho and 2501 with some time on their hands.

By way of Martha Cooper’s hospitality and driving skills, the pair made their way through the borough’s paint stores searching for the right colors before landing at Bushwick 5 Points. Enduring the smells emanating from the live poultry establishment on the corner, Pixel Pancho incorporated his style of rusted robots into the building’s gritty razor-wire and concrete exterior.

Meanwhile, 2501 added his geometric forms to the area of Bushwick 5 Points that is slowly housing the abstract work of fellow artists such as See One and Hellbent. Leaving town the following day, the artist put time to the test when creating his latest optical illusion.

As 2501 wrapped up his wall, See One and Hellbent continued working across the street on their massive collaborative wall. Through slowly building up layers weekend after weekend, the pair near the completion of their largest wall date. With jobs and trains canceled into next week, weeks of bending color and form could come to a close soon.

In the first of hopefully a prolific series of exhibitions, Brooklyn Street Art presents Geometricks, curated by street artist and art historian Hellbent. Rather than simply pairing random street artists together, as many exhibitions do, Geometricks attempts to delineate a movement that is currently at play within the scene. Artists scattered around the world have started creating pieces whose focus is abstract geometry. Featuring the work of Augustine Kofie, Chor Boogie, Drew Tyndell, Feral Child, Hellbent, Jaye Moon, Maya Hayuk, MOMO, OLEK, OverUnder, and See One, the show reaches to several cities to gather artists from different ends of the geometric(k) spectrum.

The different ends of this spectrum include artists who both directly and indirectly create work from rigid forms. With the paintings of featured artists Maya Hayuk and Augustine Kofie, the thematic connection to their imagery is blatant, though stunning nonetheless. It was, however, the installation pieces of Olek and Jaye Moon that I found to be most engaging in the space. The dimensionality inherent in the way that they create their pieces added a layer to their importance in a show centered on shape.

It is important to note that in addition to the work seen above, Hellbent has featured a wall specifically for a student’s budget. Many artists, such as Jaye Moon (featured above), See One, and Feral Child, have created smaller interpretations of their larger gallery pieces and have been priced at under $200.

Geometricks will have a public opening tonight from 6pm to 8pm at Gallery Brooklyn and will run from September 22 to October 28. Free shuttle service will be provided from the Carroll Street F/G station to the gallery as well as from the after party back to the station.

All photos by Rhiannon Platt

Brooklyn Street Art are going to be organizing a series of shows at Brooklyn’s new gallery, Gallery Brooklyn. Vandal or Visionary Series has kind of a cool concept, where BSA will pick a different artist to curate each show in the series. The first show in the series is GEOMETRICKS, curated by Hellbent. The artists in the show are Augustine Kofie, Chor Boogie, Drew Tyndell, Feral Child, Hellbent, Jaye Moon, Maya Hayuk, MOMO, OLEK, Overunder and See One, so between that line up and the name of the show, it’s probably pretty clear that GEOMETRICKS is about work by people in the street art community who are leaving lettering and pop art behind and including somewhat abstract shapes and patterns in their work, kind of like a street-art friendly version of graffuturism.

In addition to a great line up of artists, the thing I’m most excited about with this show is that their will be one wall of the show devoted to inexpensive and discounted works for students only. The Young Collectors Wall will only have work by the GEOMETRICKS artists priced under $200, and you’ll have to show a valid student ID to purchase any of the pieces. I have to applaud BSA for this idea. It’s rare that a gallery will have quality artwork or art products available at prices that are reasonable for students. So students, get to the show early, because I’m betting that these works will be gone quickly. You might get a real steal and suddenly have the best-decorated room in your dorm.

Here’s a little invite from BSA:

You are cordially invited to have a blast in Red Hook Brooklyn with BSA Saturday Sept 22nd, where we’ll present amazing new gallery works from 11 of the best Street Artists doing abstract GEOMETRICKS on the street right now, musical jams from John Breiner, and a special Young Collectors Wall where a limited number of works by the artists in the show will be on sale under $200 for students with a current valid school ID. After GEOMETRICKS walk a few blocks to party with us at Brooklyn Crab and take the free shuttle bus back to the subway when it’s all over. It’s a cool September night in Red Hook that you don’t want to miss!

Check out BSA for more info. 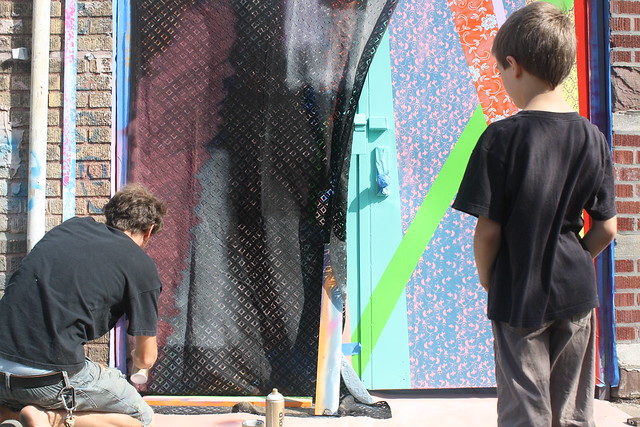 With a name like Hellbent and the detail-oriented nature of his stencils, there isn’t a more fitting phrase to capture his work than “the devil’s in the details.” Hellbent on perfection, the artist taped down layer upon layer of paint, paper, and lace to create his geometric patterns. The intricate designs coupled with the florescent colors combine to form work that is both visually and technically complicated. 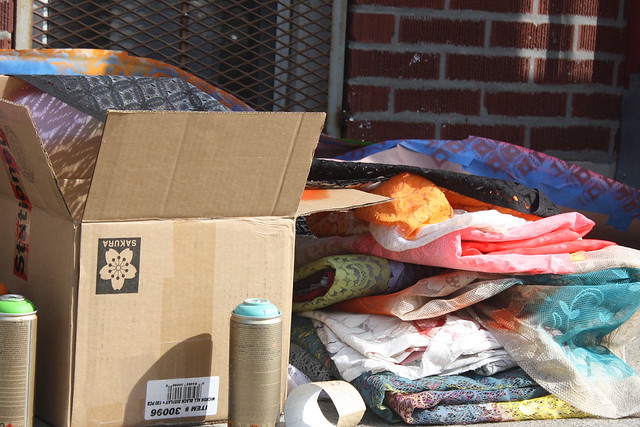 By incorporating various colors, fabrics, and shapes, Hellbent has given a gate to Bushwick that can be enjoyed by any viewer with imagination. While creating the work, one woman stopped by to share what kinds of clothes she imagine the fabric to be. Others simply fixed their gaze upon the colors, even as they continued their walk down the street. 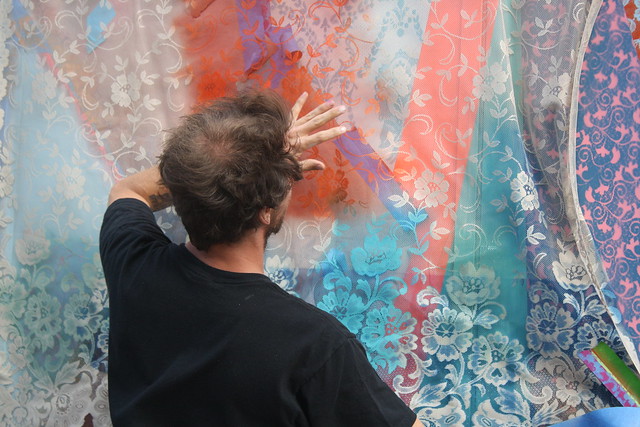 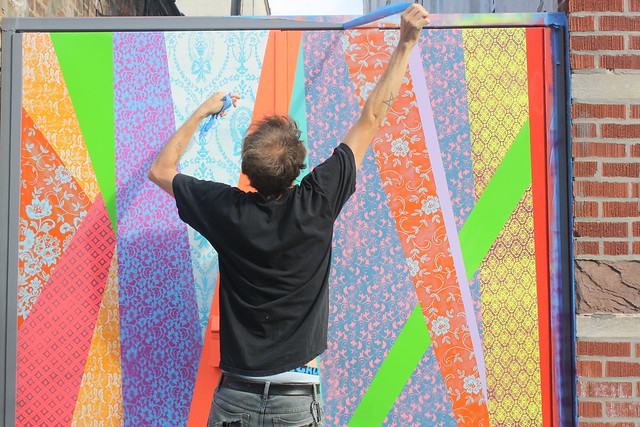 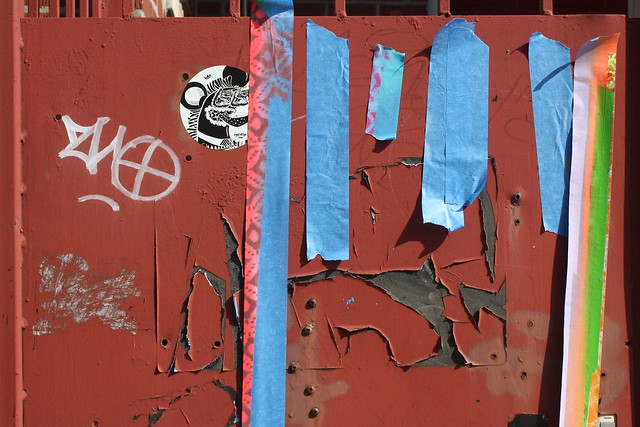 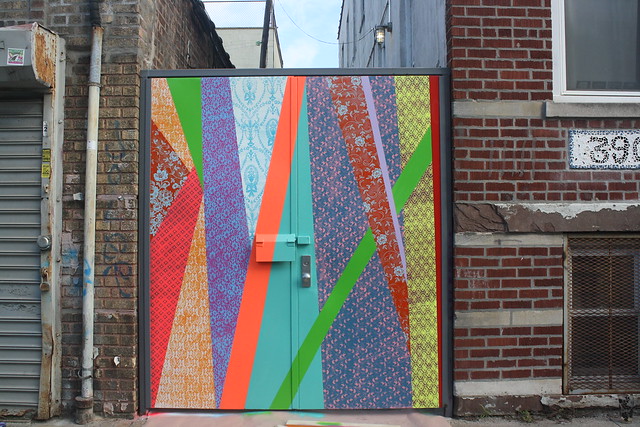 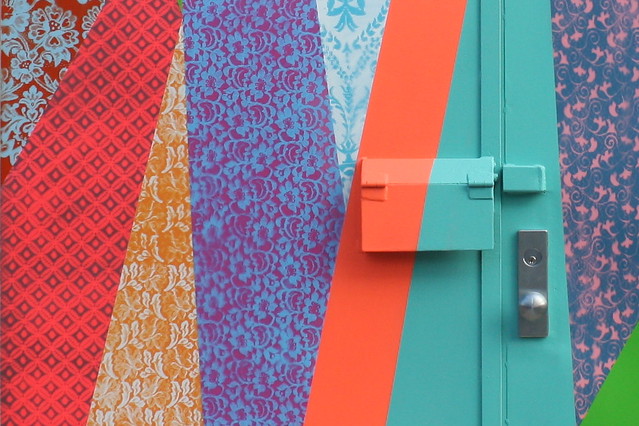 I made it over to Welling Court this afternoon — and was greeted by dozens of freshly-painted walls. Some shutters were closed and a few of the spaces were inaccessible, but there was still much to see and document. I also discovered some new artists.

If you looked at Vandalog this week, you’d think it was a slow week in street art. That’s not so, but I’ve been locked down working on Up Close and Personal (opening pics here). So here’s some of what I missed covering this week: